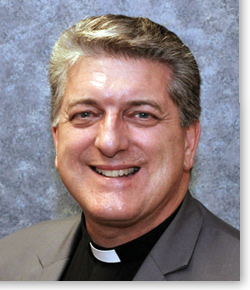 Pastor Tom Boeck grew up in Menomonee Falls, Wisconsin and attended Immanuel Lutheran Church and School in Brookfield, Wisconsin.  He attended high school at Milwaukee Lutheran High School. After beginning his undergraduate work at The University of Wisconsin in Platteville seeking a degree in broadcasting, he transferred to Concordia University-Wisconsin where he earned his bachelors’ degree in business.

After college, Pastor Boeck moved to New York City where he began his career with a brief stint in retail before becoming a commercial construction manager in New York City where he worked for nearly twelve years. In 1995, he moved to Marietta, Georgia, taking a position with the Atlanta Olympic Games in the construction group.  After completing the work on the Olympics, he continued to work in the construction management industry for another eight years, when he transitioned into the commercial real estate development business, taking a keen interest in green building development. He earned his LEED Accredited Professional (LEED AP) credential and started a green building consulting firm which he owned and managed for 11 years, closing the firm in 2016.

As an entrepreneur, he was also was a part owner and managing partner in a beverage service company providing installation services for the largest beverage company in the world, while servicing local small businesses as well. He managed both the beverage company and the green building consulting firm simultaneously for 10 years. He liquidated his interest in the beverage business in 2016.

While serving as an elder at Faith Lutheran Church in Marietta, Georgia, Pastor Boeck was led by the Lord to pursue the ministry.  After discussions with his wife, Sharon, and their family he spoke with his pastor and the district president who guided him to follow the SMP ministry track at Concordia Seminary in St. Louis. He began seminary training in 2012, beginning a two-year vicarage at his home congregation. He was ordained in 2014 as an SMP pastor and completed his certification in 2016.  He earned a master’s degree in Theology in 2018, majoring in theology and minoring in systematics.

In his brief ministry he has led Christian Education-developing curriculum for both adult and youth confirmation classes, Youth Ministry, Stewardship, Properties, and Church Finance. He was responsible for elderly shut-in ministry as well.

He and his wife, Sharon, have three grown children. He enjoys most sports, and is a die-hard Green Bay Packers fan.